Happy Friday! Can you believe that next week it will be May?!

This week I went into my “archives” and found some of my sky pictures. The sky is my favorite photography subject of all. I find the continuity of it calming and the discontinuity of it thrilling.

“Once you have tasted the taste of sky, you will forever look up” Leonardo da Vinci

And as always, here are some articles that I have found interesting:

Her move from stage to screen was dismissed as a fad – but Mary Pickford went on to earn millions and co-found United Artists. Amy Nicholson looks at how ‘old monkeyface’ became ‘America’s Sweetheart’, helping to shape the US film industry.

What is expected to be its primary function tends to remain in the shadows of its much more invaluable role: Rhei is a dynamic installation, an animated sculpture, an idea expressed in the form of a minimalistic, digital clock. Time flows. Literally. Beautifully done.

‘I Just Want to Make Her Proud’

In all honesty, I am not a supporter of professional sports. At the same time though, I do support people that work really hard, especially amidst great difficulty in life, and especially if they are young. So, the story of Chase Claypool is a good one. And, he played at Notre Dame, one of the prettiest campuses I’ve ever been to and one of the greatest libraries.
Side note, they have one of the most important and historic collections of Dante in North America. “The collection currently holds nearly 3,000 volumes of rare editions and critical studies ranging from the Renaissance to the present. The collection also includes eight incunabula and almost every edition published in the 16th century.” 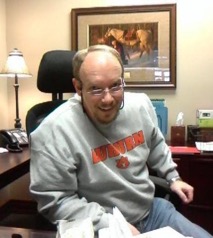